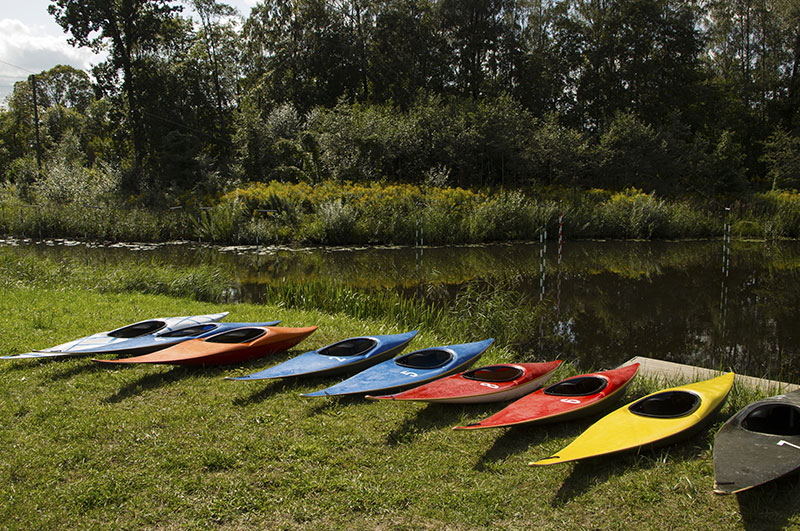 Discover the Finow Canal from the water by canoe, beaver raft or motorboat. The well-maintained "Treidelweg" cycle and hiking path takes you along the Finow Canal and invites you to further discoveries. Along the banks there are charming, natural places to pause. Technology enthusiasts can also marvel at impressive hydraulic engineering structures - the 12 historic locks - as well as evidence of the industrial past.

It is located on an area of about 17 hectares at the old rolling mill. The area was completely redesigned in 2002 on the occasion of the State Garden Show. Today it is a fantastic children's land with adventure playgrounds, a fairytale forest, a giant slide, a pedal car course and many other attractions for a varied day out with family or friends.

From the Montage Eber crane you can enjoy a wide panoramic view.

The Eberswalde Museum is one of the oldest city and regional museums in Brandenburg with a collection dating back over 100 years. The museum's work focuses on collecting, preserving, researching, exhibiting and communicating evidence of the natural and cultural history of Eberswalde and the Finow Valley between the towns of Finowfurt and Eberswalde.

The museum's collection of over 25,000 objects forms the basis and starting point of the museum's work in Eberswalde. It is used for educational and research purposes.

The history of the present Eberswalde Zoo dates back to 1795.

The zoo is a small jewel in the middle of a beautiful mixed forest landscape. There is always something to experience on 15 hectares. At all times of the year, the naturally designed enclosures offer plenty of space for encounters across all five continents.

Eberswalde Zoo has plenty of space for animals and visitors and fewer fences. White-tufted monkeys or calico lemurs live completely free in the trees of the zoo and cross visitors' paths. There is the jungle house, a walk-in fallow deer or kangaroo enclosure and the cold-loving Amur tigers in an ice-age glacier landscape.

The Niederfinow boat lift in the Oder-Havel Canal was opened in 1934 after 7 years of construction. Prior to that, a lock staircase at Niederfinow served to overcome a 36-metre drop in the Oder-Havel Canal. Today, the enormous steel construction attracts visitors from all over the world who can witness the spectacle of ships being transported up and down the huge trough (60 m long, 85 m wide and 12 m deep) silently and with little energy expenditure. From the visitor platform you have a wide view of the Niederoderbruch.

A new ship lift is currently under construction next to the historic one. An exhibition in the visitor centre provides information about the construction project and shipping in the region.

The Schorfheide Wildlife Park in Groß Schönebeck is a special family experience. Most of the wild animals that live here were or are native to the Schorfheide. There are wolves, bison, elk, lynx, wild horses, otters, red deer, fallow deer, wild boar and mouflon.

In addition, rare breeds of domestic animals threatened with extinction are bred here. The park offers peace, recreation and experiences in nature, and for children a stay in the game park is a great experience. The large adventure playground, the campfire site, the water playground and the petting enclosure are particularly popular. The wildlife park team organises guided tours, wolf feeding or even baking billets around the campfire. Advance booking is required for group excursions.

The broken sound barrier, the reverse thrust, the white line on the horizon - aircraft lovers take note. This museum will remain unforgettable for all those whose hearts beat faster when an aircraft flies by. Aircraft, flying training devices, children's quads, electric cars, tracked vehicles and hot-air balloon experiments and almost everything you can touch and try out can be found at the Finowfurt Aviation Museum.

The museum in the small town of Oderberg, in the very east of Brandenburg, is probably one of a special kind: what was once a local history museum for prehistory and early history has developed over the last 60 years into a technical museum that is unique for the state of Brandenburg, depicting inland navigation in the entire Oder region.

The area around Oderberg is not only beautiful as an end-moraine region shaped by the Ice Age, but is also a historical treasure trove of extraordinary richness, from prehistory and early history to the Middle Ages and modern times.

The Renaissance building of the castle was initially constructed around 1540 as a typical North German brick building, without any decorative façade. Previously, there had been a castle-like complex on this site, of which no traces remain. The roof truss was rebuilt in 1662, after the destruction of the house in the 30 Years' War, and is still preserved in its original state today.

It was not until 1834, under King Frederick William III, that the palace acquired its present appearance with the almost square ground plan, the turrets and the arrangement of the doors and windows. Since then, the wedding hall has been adorned with an opulent stucco ceiling.

From then on, the castle served as the residence of the royal lords and their hunting guests. Later it was used as a residential and administrative building for the head forester's office and, from 1973 to 1989, as a cultural centre for the forestry workers of the Bernau State Forestry Enterprise.

Today, the hunting lodge houses part of the exhibition "Hunting and Power". The wedding hall is also used for concerts and readings.

Chorin Monastery is one of the most beautiful monuments of German brick Gothic architecture. The entire monastery complex is grandiose and also enjoys a very scenic location on the Amtssee lake. The buildings bear witness to the great skill of the monks: to build ornamentally in Gothic style and yet not to violate the Spartan principles of religious architecture. The Chorin style set the trend for architecture in northern Germany.

The Schorfheide-Chorin Biosphere Reserve north-east of Berlin is one of Germany's largest and best-known protected areas, covering almost 130,000 ha.

Large stone and stone box graves as well as entire fields of burial mounds bear witness to settlement in the Neolithic and Bronze Ages. From the Middle Ages, the famous Chorin Monastery - one of the most important examples of North German brick Gothic - has been preserved.

In the Schorfheide, a traditional hunting area, no settlement was allowed. The former castles were converted into hunting lodges and used by the Ascanian counts, Brandenburg electors, Prussian kings, German emperors, Nazi leaders and statesmen.

The Lower Oder Valley National Park is a natural riverine floodplain landscape and is part of the German-Polish "Lower Oder Valley" Park. On the German side, approx. 10,300 ha of national park are protected (along the Oder from Hohensaaten to Mescherin/Staffelde). In addition, there are another 17,000 ha of protected landscape area as a buffer zone.

From November to April, the Lower Oder is flooded every year with metres of meadows, pastures, floodplain forests and moors. The water level is regulated by a buffer system and the floodwater is thus distributed over a wide area without causing any damage. At the same time, the Oder water is biologically purified. After the floods, the breeding season for birds begins.

Nowhere else in Central Europe have such large floodplains been preserved. The natural conditions and the immediate border location with Poland have prevented these areas from being built on. In Poland, the polder system destroyed during the war was not repaired and thus the areas were no longer used economically. As a result, a unique renaturation has taken place in the past decades.