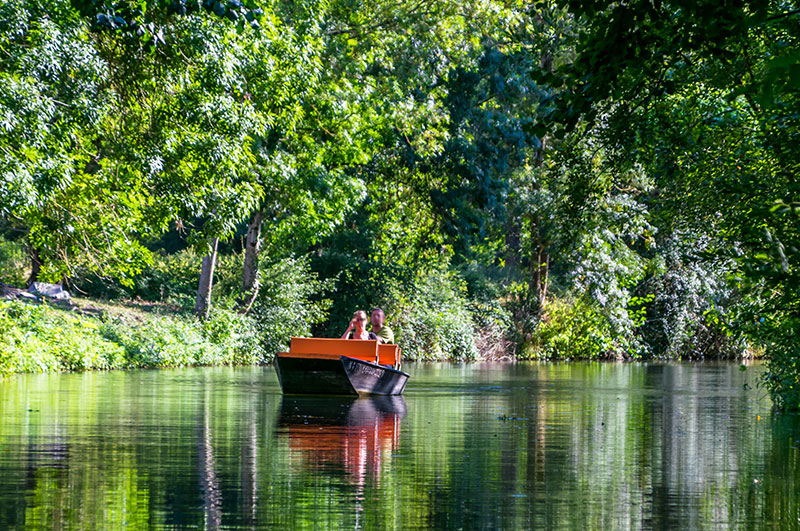 The Finow Canal is the oldest navigable artificial waterway in Germany. For more than 400 years it has connected the Havel with the Oder and was for a long time one of the most important transport links in the Mark Brandenburg.

In 1603, the Elector Joachim Friedrich Wilhelm issued the order to connect the Havel with the Oder at Liebenwalde via the small river Finow. In 1609, after only four years of construction, a stretch of 22.6 km from the Havel to the town of Schöpfurth could be navigated under the most difficult conditions. In the process, 5 locks had to be overcome. The political situation at the time, permanent financial bottlenecks and setbacks in the construction work did not allow regular shipping traffic to begin until 1620 on the Finow Canal, which was then 38.62 km long and had 11 locks. As a result of the devastating Thirty Years' War, this striking hydraulic structure rapidly fell into disrepair. In 1692, the Elector ordered investigations into whether a connection between the Havel and the Oder would be feasible.

From 1743, by decree of Frederick II, the canal was restored with a modified route and more stable locks. In 1749 the canal was navigable again. In the period that followed, constant lock repairs and alterations were also necessary. The Finow Canal developed into one of the most important German inland waterways and determined the rapid economic development of the Finow Valley as the cradle of the "Brandenburg-Prussian industry" until the 20th century. Even today, numerous cultural and historical sights from this industrial age can be discovered along its banks. Soon, however, the capacities of the waterway were exhausted.

In 1914, the economically more effective Oder-Havel Canal was opened for inland navigation. The Finow Canal lost its importance. For years it served primarily only to regulate the water balance and accordingly only the most necessary maintenance measures were undertaken.

There is plenty of information about the history of the canal and its structures, which we do not want to repeat here. We therefore refer to documents and sources for more in-depth study, e.g.: