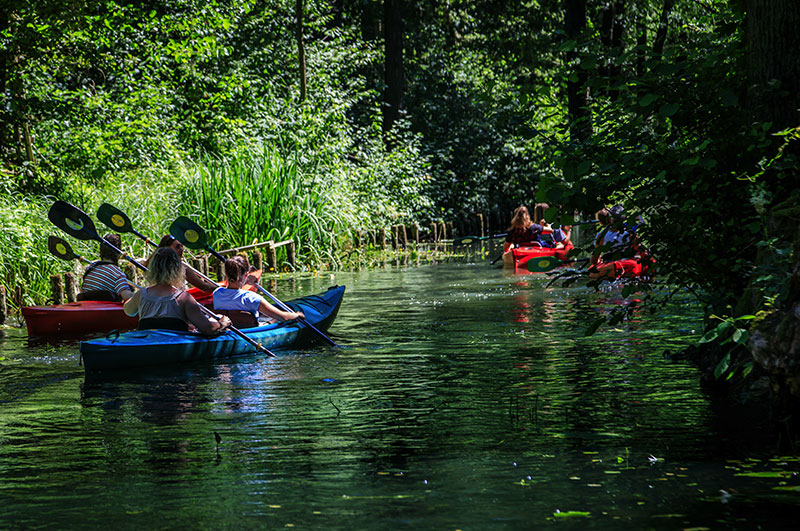 Boating on the canal

The Barnimer Land, an ice-age ridge between Berlin and Eberswalde with rolling hills, large mixed forests, lakes and waterways, is one of the most beautiful regions in Brandenburg.

The Finow Canal, Germany's oldest man-made waterway and a listed monument, runs parallel to the Oder-Havel Canal between Zerpenschleuse and Lieper Schleuse. On the Finow Canal, recreational captains keep to themselves as they pass through the hand-operated locks. Facilities from 250 years of industrial history alternate with idyllic, natural stretches of riverbank. No other area in Brandenburg offers such a symbiosis of scenic beauty and impressive industrial culture. With the reopening of the 10 km long Finow Canal section "Langer Trödel" in 2016, the closing of the gap from the Upper Havel to the historic Finow Canal as well as to Lake Werbellin became a reality. This means that the Finow Canal is once again navigable without interruption for 42 km and can be navigated without a licence with a charter certificate.

The Finow Canal is attractive for water hiking by canoe as well as by motorboat. There is a well-developed tourist infrastructure with several rest areas and smaller marinas in the neighbouring communities, such as Liebenwalde.

Valuable travel tips for trips on the Finow Canal can be found, for example, at: